The second true "N-card" set was produced in Venezuela by the Bigott Company under their Diana Cigarrillos brand is designated as set N561 in the ACC.

The Diana Cigarrillos cards (example shown at right) measure about 1-3/8 by 2-5/8 inches. They are numbered and bear the player's full name on the front and back. The card backs also list the player's position and team as well as a sponsor message printed in Spanish.

Because of the obscurity of each of these sets, it is unlikely that their ACC number will be causing any mass confusion among today's vintage collectors. However, it is interesting to note for the numbering purist that these are the only true "N-card" baseball cards according to Burdick's Catalog. Might make a good trivia question at your next gathering of vintage card collectors.

We are continually expanding the Old Cardboard website with more set profiles, checklists and set galleries. Recent (past 30-40 days) additions include:


We continue to update the website with checklists and full set galleries for additional vintage issues, so check in often to check out the latest additions. There are now many thousands of card images on the Old Cardboard website and the list continues to grow. We welcome and encourage feedback with checklist additions, card images, error corrections and suggestions. Please send all input to editor@oldcardboard.com.

Issue #10 (Winter 2007) of Old Cardboard magazine will be headed to the printer soon and is on track to be in subscriber hands by January 15 as scheduled.

The cover for this latest issue is keyed to our lead article about the 1910 E125 American Caramel Die-cut set. After assembling the most complete group of E125 cards ever, author Seefeldt shares his knowledge of this unique and much sought after issue. An accompanying gallery includes all but two of the cards from the set--and one of those has never been verified to exist in the hobby. Detailed images of all four back variations (each displaying a team checklist for all cards issued for the four teams represented in the set) are also provided.

The Winter 2007 issue also includes an article that I (Lyman) co-authored with Frank Keetz featuring the "Big Eight" baseball trade card sets. Frank literally "wrote the book" on 19th century baseball trade cards and has provided valuable input in preparing the article. The eight sets profiled are important in that they are the only baseball trade cards (of the several dozen known sets) that are listed in the American Card Catalog.

In addition, Old Cardboard subscriber John Bowden discusses the popular T227 "Series of Champions" issue originally distributed in 1912 by Honest Long Cut and Miners Extra tobacco brands. In the article, Bowden probes beyond the four baseball players in the set (all of which are now in the baseball Hall of Fame) and includes a gallery of the complete 24-card multisport series.

Also in the issue, Pacific Coast League expert Mark Macrae provides his perspective about a rare PCL set produced in 1935 by San Francisco-based Pebble Beach Clothiers. The set features a unique mix of prominent PCL players in a real-photo-postcard format. Unique among baseball card sets, each card in the Pebble Beach series was personally autographed by the subject "at the factory" before the cards were distributed.

Rounding out Issue #10 is a two page article prepared by Old Cardboard that takes a brief look at the T9 set--boxing's counterpart to the baseball T3 "Turkey Red" cabinet-size card issue. Focus is on boxer Abe Attell, a key villain in the infamous 1919 Black Sox scandal. Included is an incredible photograph of the Cincinnati Reds team on opening day of the 1919 World Series...with Attell standing just behind the lineup of Reds players.

The above feature articles are in addition to the magazine's regular "Editor's Notebook," "Collector's Dugout," and "Old Cardboard Crosswords" sections. More detailed abstracts for each of the above articles, including thumbnail images of the full-color page layouts, can be viewed on the Old Cardboard website.

5. Battle of the Hands (Brown vs. Mathewson) 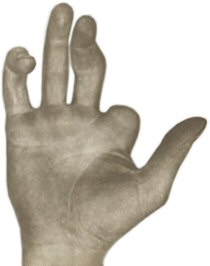 Two News Service Photo lots
that sold in Mastro's Decem-
ber 2006 Premier Catalog
Auction showcase the
pitching hands of two
Hall of Famers from the
dead-ball era--Mordicai
"Three Finger" Brown and Christy Mathewson. Both were at the height of their fabulous careers when the photos were taken--this time last century.

As seen in the photo on the left, Brown's hand was terribly disfigured in a corn shredder accident when he was only seven years old. For some people, such a handicap would be an insurmountable obstacle. Left with only a stump for an index finger, however, Brown made the most of his misfortune. It was the source of his strength and the foundation for his amazing curveball. The missing digit allowed him to apply an unusually high amount of spin that made his pitches almost unhittable.

A similar photo of Christy Mathewson's pitching hand was also sold at the auction. Mathewson's calloused hand is shown above right. Although not missing any digits, the photo does reveal a slightly shorter-than-average index finger. A period handwritten comment on the back of the photograph notes that it is "A detailed study of Mathewson's hand showing the short index finger which means so much in the delivery of many of his curves." Based on the note, the prevailing belief at the time was that a shortened index finger worked to a pitcher's advantage for throwing curve balls. So between these two pitchers, Brown clearly had the advantage!

Both of the news photos were the work of well known baseball photographer Paul Thompson whose offices were located at #10 Spruce Street in lower Manhattan. By most yardsticks Matty is considered the better pitcher and his vintage baseball cards generally command higher prices than those of Brown. However, the sale price for Thompson's photo of Three Finger's mangled hand outdistanced that of Mathewson by a score of $5940 to $640 (after including the 20 percent buyer's premium). After all, it is the most famous hand in baseball--and the hand that inspired the popular nickname for which Mordicai Brown is affectionately remembered today.

Old Cardboard, LLC. was established in December, 2003, to help bring information on vintage baseball card collecting to the hobbyist.  Produced by collectors for collectors, this comprehensive resource consists of three components: (1) Old Cardboard Magazine, (2) a companion website at www.oldcardboard.com and (3) this eNewsletter. The Old Cardboard website contains more than 500 pages of descriptive reference information for baseball card sets produced fifty years ago or longer.  Each of these set summaries has a direct set-specific link to

auctions and a similar link to

's powerful search engine for further research.  The website also includes a Show and Auction Calendar, an eBay Top 50 Vintage Sellers List, and much more.  As a result, the Old Cardboard website makes a great "Alt-tab" companion for vintage card shoppers and researchers.  Old Cardboard eNews provides current hobby news, upcoming shows and auctions, and updates to the website and the magazine.  It is published around the middle of each month.  For a FREE subscription to the eNewsletter, or for subscription information on Old Cardboard Magazine, please visit the website at www.oldcardboard.com.  If you find this information resource helpful, please tell your friends.  We need your support and your feedback. Thank you.